An in-depth discussion on how to manage reactive power in utility network. This is important basic concept to know in the times of increasing EV and solar renewables penetration.

Most of the loads in a modern power distribution system are inductive in nature. Typical examples being, loaded overhead lines, motors, transformers, cables, drives, and fluorescent lights. These inductive loads consume both active and reactive power. Active power is required to meet real output requirements and inductive reactive power is required to maintain the magnetic field in the core. Phasor diagram of these parameters is shown in Fig 1.1(a) and 1.1(b). The phasor diagram is described below. 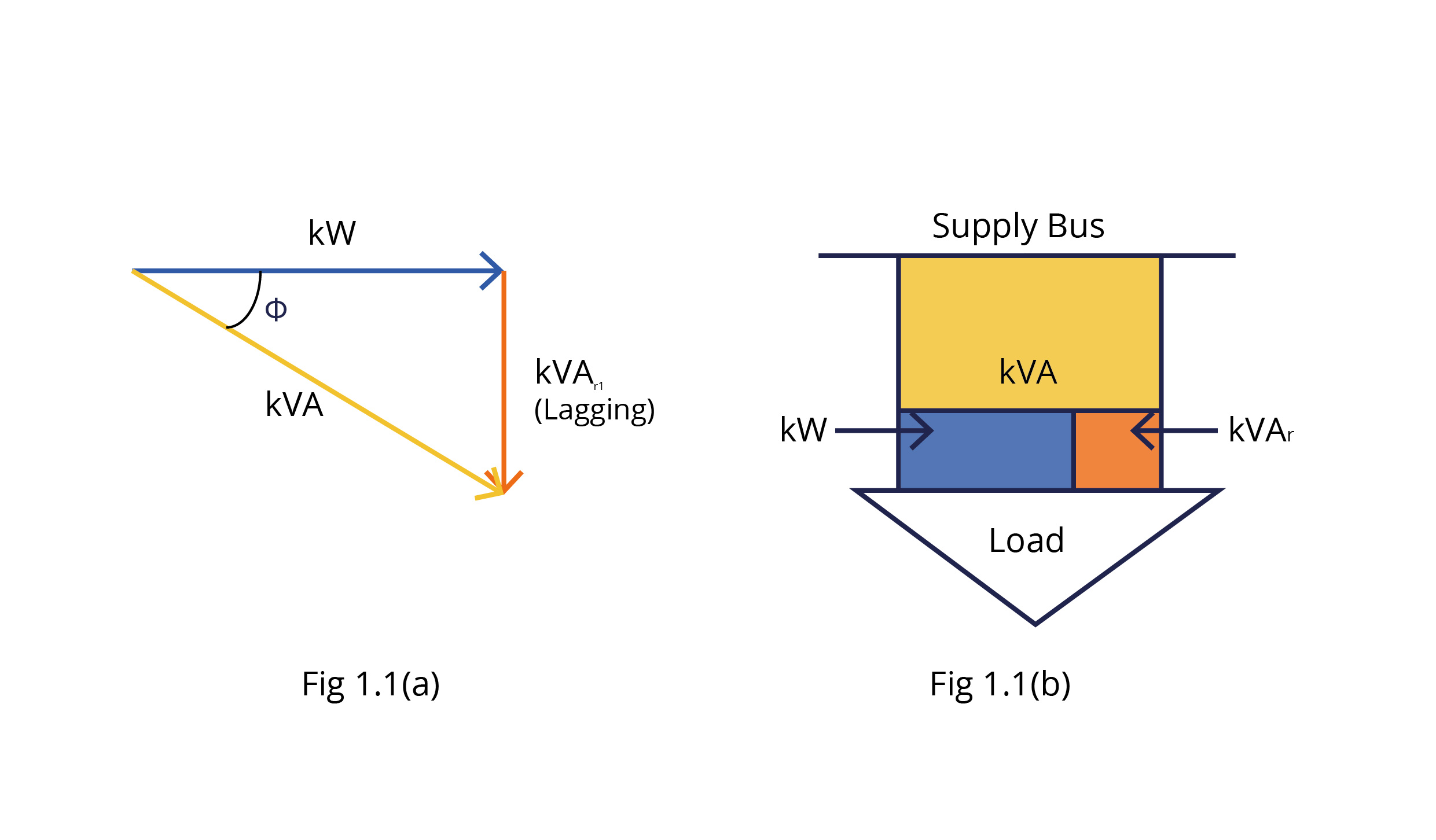 Thus, we need to reduce the reactive power to reduce all of the above ill effects. The most effective method for this is increasing the power factor of a power distribution system. The methodology used to achieve a higher power factor under modern application conditions is REACTIVE POWER MANAGEMENT. It can also be said that “REACTIVE POWER MANAGEMENT” is a tool for improvement in the power factor of a distribution system. Hence, both of these are two faces of the same coin.  The methodologies used for power factor improvement are mentioned below 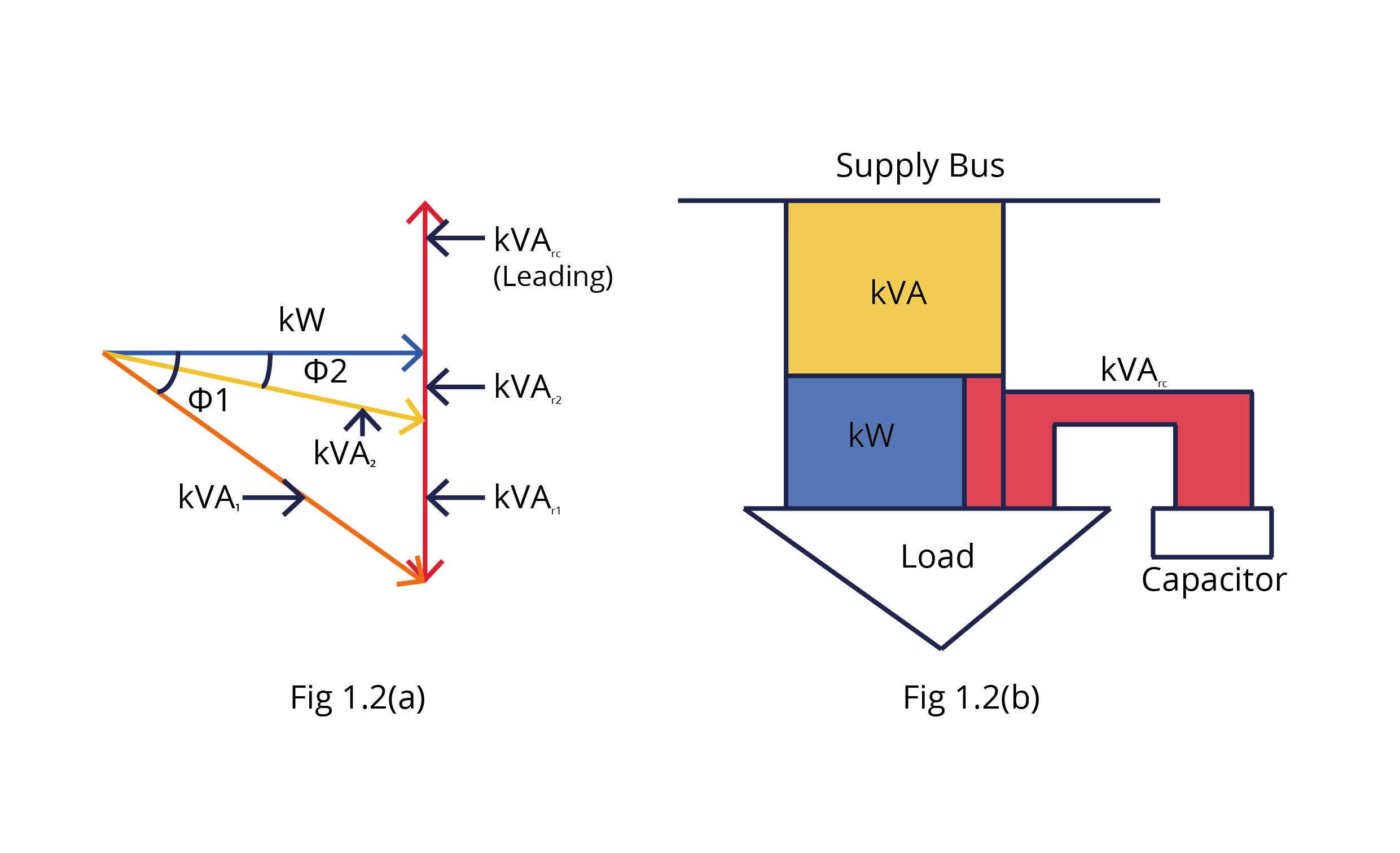 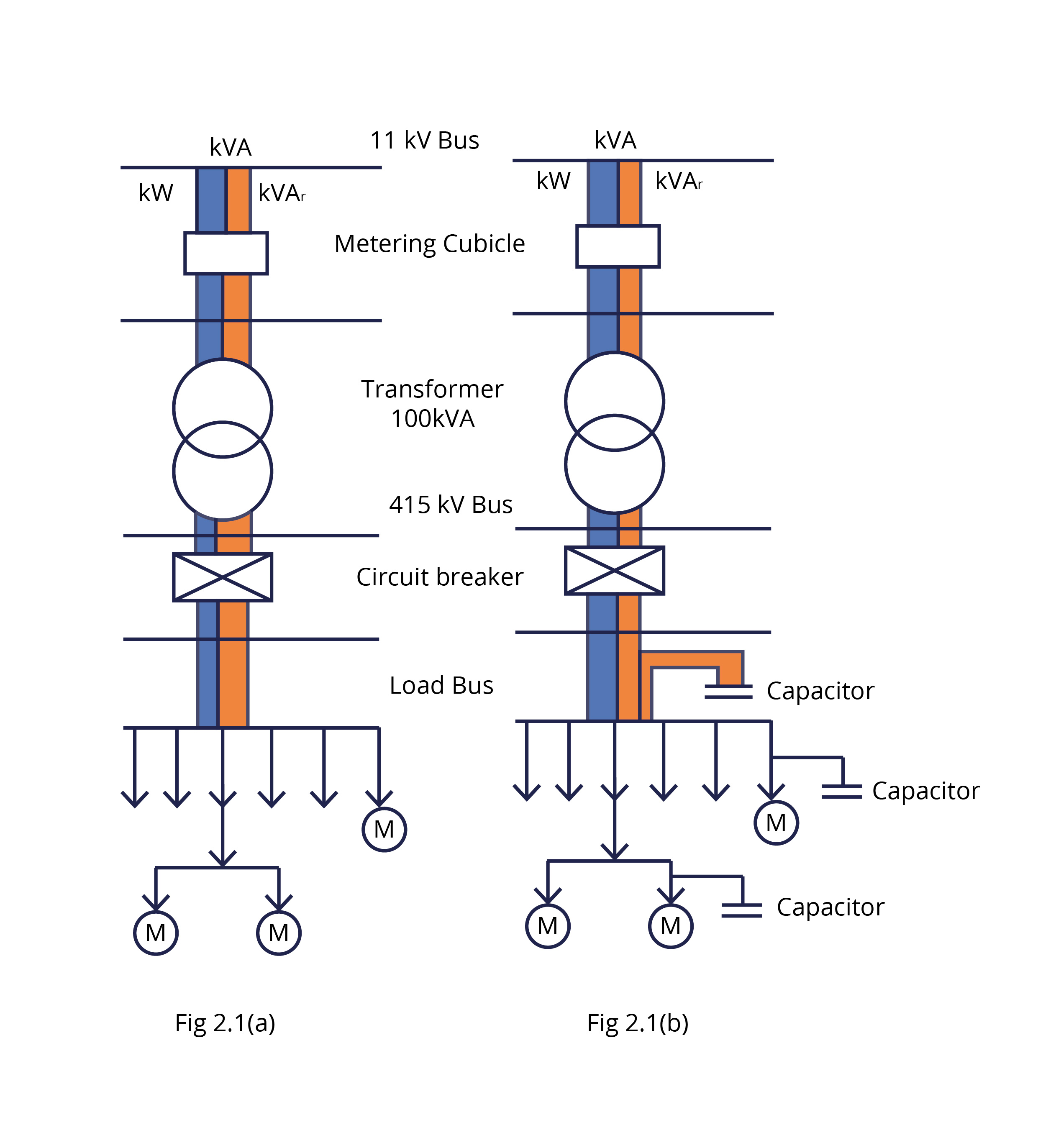 3.1 – Providing compensation at the main incomer to power distribution system bus bar is called central compensation. This is shown in Fig. 3.1. Here capacitor is installed at position No. 1. 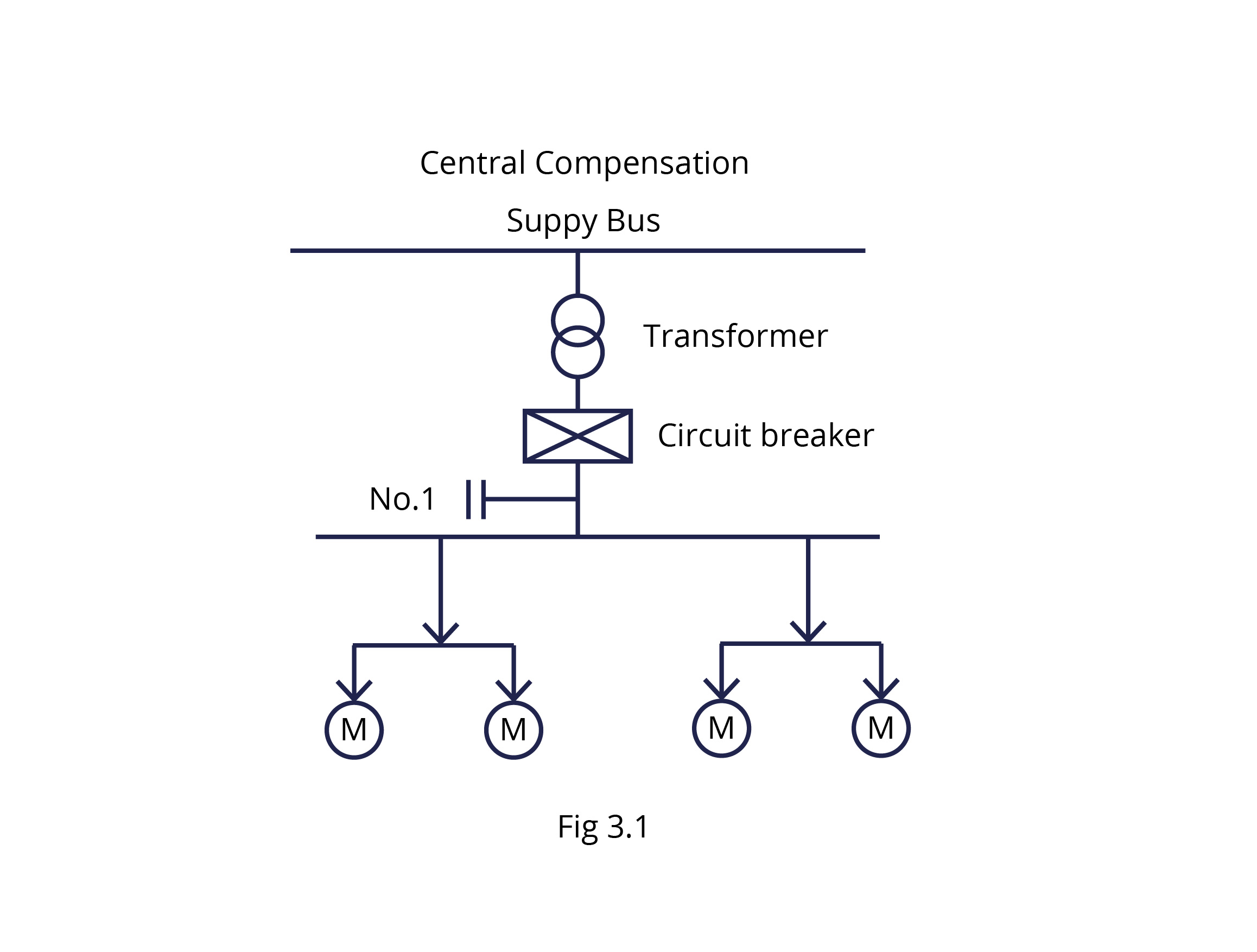 This is suitable for installations where there is a number of power distribution boards for various load feeders. This is shown in Fig. 3.2. 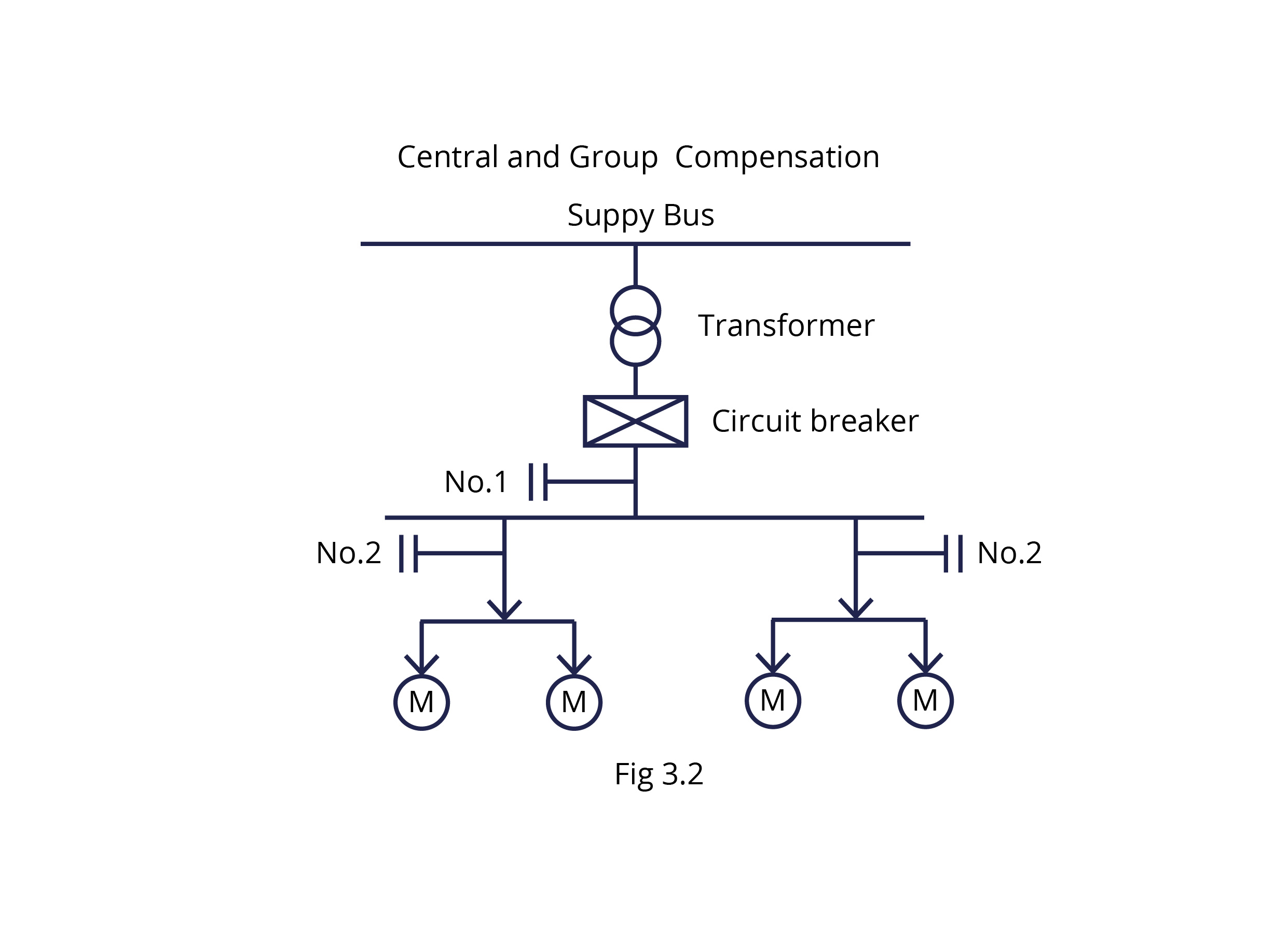 3.3 – Providing capacitor compensation at all positions as described below.

This is suitable for installations consisting of the main receiving station, substations, several load feeders, and a variety of loads. This is shown in Fig. 3.3. 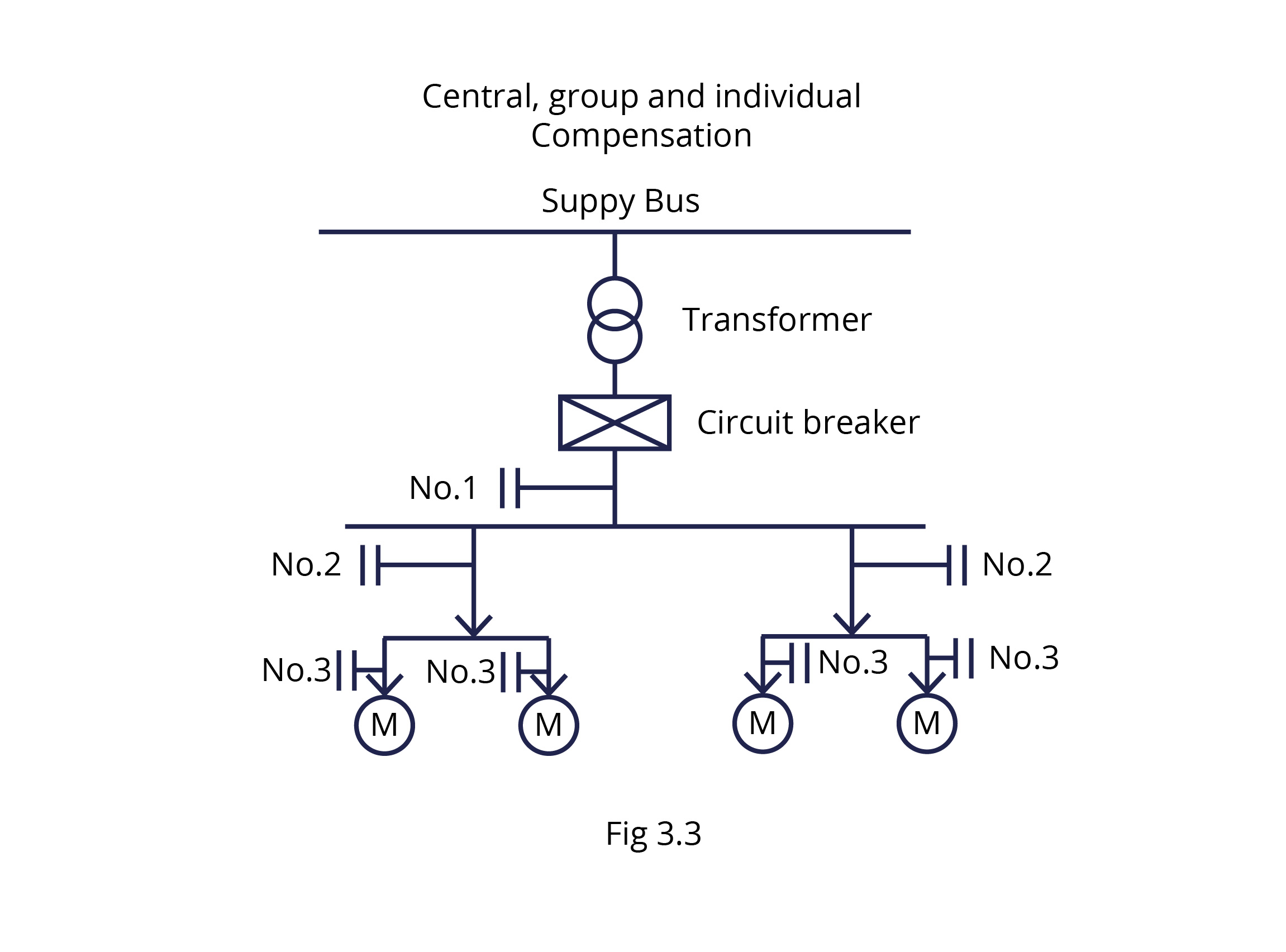 The estimation of kVAr required for compensation to achieve desired power factor is generally done depending on the type of loads to be compensated. For this purpose, the tables and formulae given in this section may be used.

Table 4.1 gives the recommended ratings of power capacitors, which are to be used directly with 3 ph. AC induction motors as at position No. 3 of fig 3.3 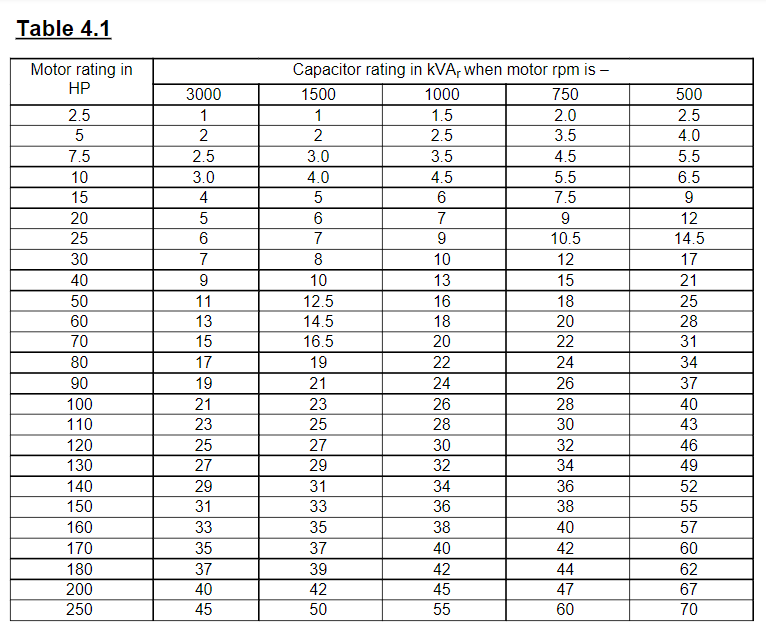 For power distribution systems, the capacitors are to be installed at position No.1 of Fig. 3.1. Initial pf, final pf, and multiplying factors are shown in table 4.2. The operating load kW and its average pf can be obtained from the electricity bill. Else, it can also be calculated from the following formula.

Average pf = kWh/kVAh, operating load kW = kVA demand X average pf. The average pf is considered as initial pf and the final pf is the pf to be achieved by “REACTIVE POWER MANAGEMENT”. This can be calculated using multiplying factor given in table 4.2, This is shown in the example given below.

Calculate the required kVAr compensation for a 500 kW installation to improve the pf from 0.75 to 0.96.

The table 4.2 is based on following formulae.

pf1 and pf2 are initial and final power factors respectively.

How can we help you?Schedule a free, no-obligation consultation today

Book on our calendar
Learn more